“Ack! Help me!” I watch this guy get smashed into pulp through this locker I’m in.

This certain person is killing​ this guy so easily that made me question if she’s even normal.

For the past few minutes, I was hiding in this place. Although I have these knives with me and planned to eliminate her in the first place, I still can’t fight against that person. I saw how much strength she has, it’s obviously impossible.

“Stay down.” The girl who was holding a weapon said, stomping on the pitiful person that was caught by her.

That person wasn’t breathing anymore but she was still kicking the body as if she’s not satisfied with just that.

“Tsk, such a wimp. Dying so easily.” She began circling around the dead body. “I heard you were the guy at that night in Hye mi’s house… Was it fun?”

What guy? I asked myself as I carefully scanned the guy’s face. Although I wasn’t so sure who that guy is, I realized that she was talking about that party where Young Ji was raped. And I’m guessing that guy is the one who raped her.

I remember that I was in that party and saw Young Ji drinking a lot of those strong beers. From one glance I already knew what Fei and the others were up to… But I didn’t stop them in any way.

“I should’ve killed you in another way.” She sighed in dismay. “Well, I’m done with you. Now, who’s next?” She asked herself, walking away.

I remained still in that small space, pondering whether to exit and run to another hiding spot or just remain here.

I quietly opened the door, timidly crawling my way out of it.

“You look stupid.” I heard from my right, from the corner of my eyes I saw her standing still and leaning on the wall as if she was waiting for me to come out.

“Tsk!” I immediately forced my way out of the locker and pulled out a knife, aiming it at her. “Stay where you are.”

“Hmm? What are you gonna do? Kill me?” She laughed, as if what I’m doing is completely stupid.

“I don’t know why you’re doing this, but I’m not involved with the incident last year. I’m innocent.” I stated, slowly backing away, keeping the knife aimed at her.

“Hmm… I was just thinking whether giving you a painless way of dying or torturing you to death” She mumbled, walking towards me. “But since you said you were innocent, then I’ll just smash your head. How bout that? Deal?”

“You monster!” I exclaimed, charging at her with the knife aimed directly to her heart.

She smiled and laughed at me as I draw closer to her, I smiled as I heard a swoosh sound as if a knife went through a flesh limb.

“What are you smiling about?” She asked, pointing at my stomach. I looked down and saw myself already bleeding rapidly.

“Wh-what?” I asked, blood gushing out of my mouth.

“Don’t ask me, you’re the one who’s holding that knife” she smiled thinly, with a satisfying look in her eyes while watching me fall on the ground. “I told you I’d let you die without pain, but you go and stab yourself.”

She crouched down and looked at my face carefully, “Your name is Lia right?”

I didn’t answer, instead, I was stealthily reaching for the smaller knife inside my pocket.

As soon as I felt it in my hands, I swiftly pulled it up to stab her but she easily caught my hands.

“Still resisting huh.” She smiled, tightening her grip in my hand until I heard a loud snapping sound.

“Agh” I winced, feeling my hand fell on the floor as she dropped it after breaking it into half. 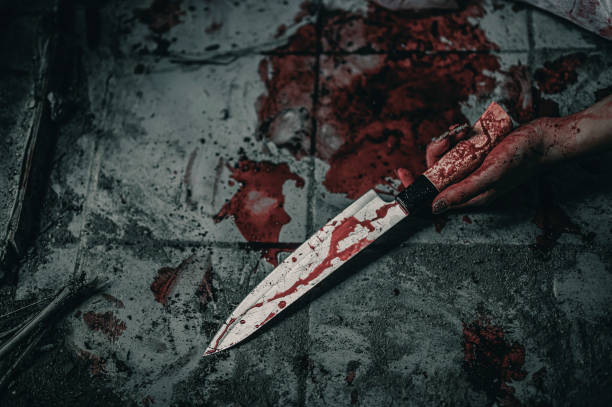 “Since I’m such a nice and lovable person, I’ll let you die on your own. Since you lost so much blood already, I believe you’ll die in about… 3 minutes.” She said after mentally computing the amount of time I have left.

“Well look who’s here.” She smiled, her eyes staring at the girl who just opened the window across the hall.

It was Jina, sticking her head out of the window.

“I’m done with you, make sure you spend the last 3 minutes the way you want it.”She looked back at me before standing up and walking towards Jina who doesn’t have a clue that she’s about to plummet to her death.

My gaze followed her, watch her push Jina outside the window and seeing her smile.

After a while she walked back to my direction. “I’ll go get her and make her regret the day she’s born.” She said with a thin smile, walking pass me.

I can feel my whole body losing it’s function, my eyes becoming hazy.

I heard her footsteps stop for a moment and said in her most cheerful voice.